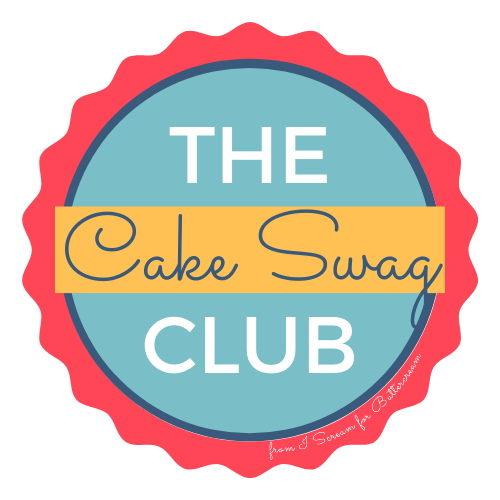 Join the Waitlist for the Cake Swag Club and get first dibs when it launches!

If you're obsessed with all things cake, like I am, you are going to LOVE this box!

YES! I WANT ON THE WAITLIST!

Each box includes multiple cake themed or cupcake themed items (for baking, decorating or just fun kitchen or personal items all with a cake theme) handpicked by me (Kara Jane) just for you!

I am so excited about the new cake box subscription!! I can't wait to see what kind of cake goodies she has found for us to play with! (Not that I need an excuse to bake!)

We're making the world a sweeter place one cake at a time!

It's actually more than just a box though.

The Cake Swag Club is a way to do something sweet for yourself.

This is when you get to immerse yourself into something you enjoy...your love of cake!

Got my box! It's delightful, very nice! I didn't want to unwrap the tissue. I love it!— Robin

Each quarterly box will be filled with a variety of items.

This box isn't just a collection of thrown together stuff or samples. No way!!!

These items are carefully curated and chosen. Each box will be themed and high quality.

(Note: each box will be different and not all of these things will be included in each box...there will be a variety of items.)

What is the cake swag club subscription box?

The Cake Swag Club is a subscription service. When you sign up, you'll get a new cake swag club box full of cake swag surprises in your mail each quarter (4 times a year...January, April, July and October)

Do I have to be a professional baker or cake decorator to get this box?

No way! If you have a love for baking cakes (or really just baking in general), then this box is for you!

Are the items included in the boxes only for fancy cake decorating designs?

No, not at all. There will be an item or two for decorating cakes or cupcakes, but they will not be for super difficult levels of cake decorating. I want this to be a box that will work for anyone who has a love of baking or decorating cakes.

The items in these boxes are home baker and cake maker friendly. (Of course if you're professional cake decorator, then you'll love this as well...because who can say no to fun cake and baking swag!) Just know that the items in this box are definitely not intimidating.

What will I get in my box?

The fun part about the boxes is that each box will mostly be a surprise each month. I say mostly because I'll be sending out hints and sneak peeks on Instagram/Facebook and emails of behind the scenes happenings, so you'll get a small taste of what will be in the box, but it'll still remain somewhat of a surprise. That's half the fun, right?

Each box will include a variety of cake or cupcake themed items and all items are handpicked by me (Kara Jane) just for you!

I really want to see what's in the box first.

I hear ya! After each box has been received by most who have purchased, I'll post pics and a video of the unboxings on the blog and will link to those here that way you can get a good idea of what's in a box.

I'll also send you plenty of sneak peeks for the next quarter's box when you sign up for the waitlist.

I want you to have a good idea of what's included, but I also want to keep it somewhat of a surprise. I just think that's half the fun!

How much does it cost?

After purchasing, your card will will be charged $75 per quarter, which will be on the last week of December, March, June and September. Each new box will be sent out the first week of January, April, July and October.

Each quarterly box will be themed and relevant for the following three months.

When will I get my box?

Boxes are sent out every quarter (4 times a year) on the first week of January, April, July and October.

Do you ship internationally?

At this time, we can only ship to addresses within the United States.

Boxes are limited so make sure to get on the waitlist to get first dibs when it opens again!

(At this time, I can only ship to US residents.)

I love my Cake Swag box! So many cool things. The box was put together so nice!— Carol

This is THE box for the home baker and cake maker...It's like getting an awesome birthday gift every three months!

Get on the waitlist to go behind the scenes and get even more sneak peeks for next quarter's box plus you'll get first dibs!

(I'll also send you a surprise in your inbox plus fun cake projects and recipes each week!)

YES! I WANT ON THE WAITLIST!