This almond cake with cherry buttercream is a super moist cake with a hint of almond flavor, then covered with a creamy, delicious maraschino cherry frosting.

A while back, I got a request from a YouTube subscriber that I make an almond cake with cherry buttercream. She mentioned it was her favorite cake and it sounded like a great idea to me, so off I went to create it.

The almond cake is based off my favorite vanilla bean cake recipe. It’s virtually the same except you’ll be adding in more almond emulsion.

Now, I use almond emulsion instead of almond extract because I think it just has a better flavor, but if you only have the extract, that’s totally fine. If you can, you really need to try almond emulsion though. You can really tell the difference when you’ve used this. I use Lorann Oils and you can find that here: Lorann Oils Almond Emulsion

You’ll also add slivered almonds around the base of your cake. So, you’ll have a nice almond flavor inside the cake and a nice crunchiness to the outside.

I wasn’t sure how I felt about cherry buttercream, but I was really surprised at how much I like it. I’ve had things with cherry flavor in it before and I was really afraid it would taste like medicine. That cough syrup taste still sticks in my mind.

Well, that’s not what happened with this buttercream. We’re not using an added cherry flavoring. We’re just using chopped maraschino cherries, so there’s no ‘fake taste’ going on here…just a delicious cherry flavor and a sweet pink tint to the buttercream frosting.

The mixing method for this cake, is the reverse creaming method, so it may be a little different than what you’re used to. Instead of creaming the butter and sugar together, you’ll be adding the butter to the dry ingredients. This makes a super tender cake. It’s so worth it.

When the cake was finally cool, I added the buttercream. I first just added a crumb coat. I let that chill in the fridge for a bit, then added a thicker layer on top and around the cake.

I filled a piping bag and just piped a couple of small buttercream dollops on the top, added some slivered almonds in between and then a cherry on top of each dollop.

Doesn’t this cake look like something out of the 1950s? I don’t know why I think that, but somehow it reminds me of the 50s.

Tips & FAQs for the Almond Cake:

Have a question that wasn’t answered? Feel free to leave it in the comments below.

Now onto the recipe. 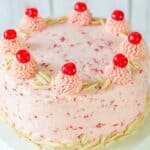 The cake layers or cupcakes can be frozen for up to a month. For cupcakes: Fill the cupcake liners just slightly over half full. Bake at 350 degrees for about 25-30 minutes. Cool on a wire rack. This post contains affiliate links. As an Amazon Associate, I earn from qualifying purchases. You can see my policies linked in the website footer.

If you try this one, let me know how you like it. Personally, I fell in love with that cherry buttercream 🙂

Items & Tools Used for this Cake: