A super moist apple coconut cake with the perfect amount of apple and coconut flavor, then covered with a cinnamon cream cheese glaze. The addition of coconut milk helps to make this cake so moist. You’ll chop your apples for this cake, which means there’s no grating them and that will save lots of time. This cake is so good your family will ask for it over and over again.

Am I allowed to say this is my favorite cake this fall if it’s a cake I came up with? Well, I’ll just say it…this moist apple coconut cake is my absolute favorite this season. Yeah, I know I have lots of favorites…it’s true…I’ve got an all around obsession with cake, but I’m just sayin’ you’ve gotta try this one.

If you haven’t had good luck baking bundt cakes, or have had them come out dry as sometimes will happen with bundt cakes, you won’t have those problems with this one.

It comes out very moist and stays moist even after refrigerating it. I think the secret to the moisture in this cake is the addition of coconut milk. I just buy the canned organic coconut milk. You want to shake up the cake well before opening it and stir it before measuring it out.

Let’s talk about some of the ingredients in this cake:

Apples: Let’s talk about the apples. I used honey-crisp apples because they’re sweet, but they don’t turn to mush when you bake them. You’ll use two cups, but you’ll want to make sure they’re peeled and chopped small. You don’t need to grate the apples…that’s just too much work. Chopping them in small cubes works perfectly.

Coconut: As far as the coconut…if you just hate shredded coconut, you can omit it, but I challenge you to try it. The combination of the flavors (the apple, coconut and cinnamon glaze) is really amazing. I added only one cup of shredded coconut here and I used unsweetened coconut flakes.

Tips & FAQs for this cake:

Oh and we’re baking this cake low and slow. It’s a thick batter and we want the entire cake to bake all the way through, so it’ll bake for about an hour.

Once the cake is baked, set it on a wire rack to cool for 15 – 20 minutes and then turn out of the pan and let cool fully on the wire rack.

While it’s cooling, you can prepare the cinnamon cream cheese glaze. This in combination to the apples and coconut flavor of the cake, just takes it to a whole other level.

You’ll want the consistency of the glaze to be a little thinner than normal buttercream, but not too thin that it’s watery. I then just used a piping bag to pipe it right over the top. If you want to go simple, just spoon it over the top of your cake…that’ll work too. 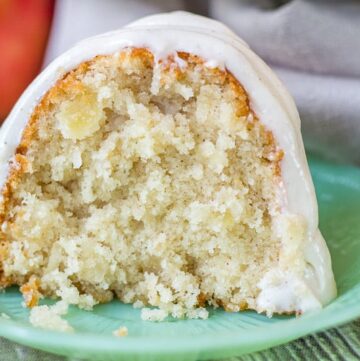 For the apple coconut cake:

For the cinnamon cream cheese glaze:

Keep any leftovers in the fridge, since the glaze contains cream cheese. Make sure to check out the Tips and FAQ section in the blog post. This recipe card may contain affiliate links. As an Amazon Associate, I earn from qualifying purchases.