This berries and cream poke cake is one of the best icebox cakes you can make. A soft white cake layer on the bottom, soaked with jello, topped with a layer of cooked mixed berry fruit and then a yummy homemade whipped cream cheese topping.

This really is one of the best poke cakes I’ve had. It’s perfect for summer, but really you can make it any time.

Basically a poke cake is one that you bake, poke holes in and then pour over a pudding or jello mixture that soaks into the cake adding moisture and flavor.

This one isn’t your average poke cake though, it’s really amped up.

For this cake, we’re amping up the flavors by not just using jello, but we’re adding on a layer of cooked mixed berries and then topping it all off with a scratch whipped cream cheese topping.

Now, let’s talk a little bit about just some of the ingredients for this recipe. (The entire ingredient list is in the recipe card lower in this post.)

Cake mix or scratch cake: I used a doctored cake mix for this recipe, but you could also make a scratch vanilla cake if you wanted to.

Strawberry jello: I don’t think anyone makes a mixed berry jello, or I would have used that one, but strawberry is the next best thing. You’ll just be using just the small box.

Heavy cream (whipping cream): For the whipped topping we’re using heavy cream, which is sometimes called whipping cream. Now, that’s NOT the same thing as whipped cream or Cool Whip. That’s something different and won’t work as a substitute.

The mixing method for the cake will depend on what type of cake recipe you’re using, or if you’re using a doctored cake mix.

I used a doctored cake mix for this one and the mixing method is super simple. Basically you just dump the ingredients into a bowl and go!

For the whipped cream cheese topping, you’ll want to follow the instructions in the recipe card though as you really need to make sure and not add in the cream all at once and you’ll also want to whip on high until stiff peaks form, or it will end up too soft.

You’ll want to do this first, so it can cool down a bit while your cake is baking.

Do I have to use frozen mixed berries for the fruit topping?

No, you can use fresh, just make sure you have the same amount called for in the recipe. You can also use just frozen strawberries if you prefer the topping to be strawberry and not mixed berry.

For the cake, should I use a cake mix or a scratch cake?

For the jello soak, make sure to mix it how the recipe card states and not what the box says.

You want the jello soak to be more concentrated.

Once you’ve added the jello and fruit layer, make sure to chill the cake for at least a couple hours.

The cake needs to be completely chilled before adding the cream cheese whipped topping.

What is heavy cream or whipping cream? Can I use whipped cream or Cool Whip instead?

Using whipped cream or Cool Whip in place of the whipping cream or heavy cream, will not work for this recipe.

(Now, if you want to just cover the whole cake in Cool Whip, then you can certainly do that, however it will not be quite as creamy and flavorful as the topping in the recipe.)

Make sure when making the whipped topping that you whip it until stiff peaks form.

You need to whip the topping at high speed for at least a minute to get it super whipped and fluffy. Make sure to watch the video to see what it should look like. 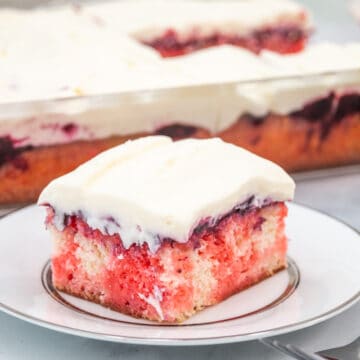 For the Fruit Topping:

For the Cake & Jello Mixture:

For the Whipped Cream Cheese Topping:

For the Fruit Topping:

For the Cake & Jello Mixture:

For the Whipped Cream Cheese Topping:

This cake should be stored covered and in the refrigerator. It should be served chilled. Nutritional values are an estimate. Make sure to check out the TIPS & FAQs for this recipe in the blog post, which may answer questions about substitutions and mixing. *This recipe card may contain affiliate links. As an Amazon Associate, I earn from qualifying purchases.

« How to Store Frosted Cupcakes
Do I Have to Crumb Coat a Cake? »