This Chocolate Rum Cake isn’t your average rum cake. This one has a spicy kick that’s mixed into the cake batter. There’s rum in the glaze that’s soaked into the cake and a nice chocolate drizzle on top. This cake is wonderful during the holidays or any time you just want to feel cozy.

You don’t want just any old rum cake, do you? I mean, what’s life without a little controversy. (Can a cake be controversial?) Anyway, I didn’t want to just come up with a plain ol’ rum cake, no I had to go all crazy (maybe a little controversial) and make a chocolate rum cake with a kick. I know what you’re asking…what’s the kick? Are you sure you want to know?

You have to promise me you’ll just give it a chance before saying no way. Ok, the kick is cayenne pepper powder. (Oh, the controversy.) Yeah, I know it sounds a little strange, but it really works well with the chocolate and no, it doesn’t make the cake spicy hot…promise.

Now, if you don’t even want to try the cayenne pepper in it, I promise I won’t be mad, but obviously I think you should try it 😉  You won’t be adding much, it just gives it a little extra spicy kick.

The flavor of the cayenne pepper is subtle. It doesn’t hit you in the face and scream CAYENNE PEPPER! You only get a hint of something spicy going on…just enough to be intrigued.

Now, you are definitely gonna taste the rum in this one. If you don’t like rum, this may not be the cake for you and you might want to try my chocolate butter cake. But, if you’re like me and you like some Captain Morgan every now and again, then I hope you try this one out.

I’m not a big drinker. I don’t like beer, nor am I a huge fan of wine either. Maybe that makes me weird? Anyway, I DO however like rum, but I’m kind of picky. I only like Captain Morgan Spiced Rum.

Every once in a while, I’ll have a glass of rum and coke, but I’ve had the same bottle of rum in my house for two years and as you can see in some of the pictures, it’s still got a long way to go.

Basically, the brand choice for rum is up to you. Of course I prefer Captain Morgan, but you may prefer something else and I say go for it.

Not only will you be adding the rum to the cake batter, but you’ll also add it to the glaze that soaks into the cake. Then you’ll drizzle on a nice helping of melted chocolate.

Ok, on to the recipe for the Chocolate Rum Cake! 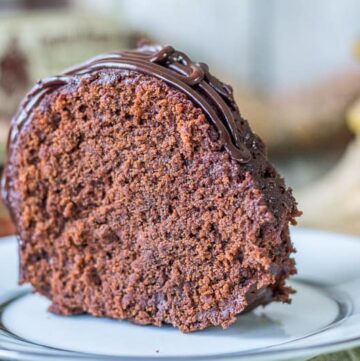 Chocolate Rum Cake with a Kick

For the rum glaze:

For the chocolate drizzle:

For the rum glaze:

For the chocolate drizzle:

This recipe card may contain affiliate links. As an Amazon Associate, I earn from qualifying purchases.

Alright, there you have it! This chocolate rum cake is definitely out of the norm, but it’s sure to be a hit with the rum fans out there.