This double chocolate buttercream is super rich, creamy and so chocolaty. You’ll use two types of chocolate in this buttercream…cocoa powder and melted semi-sweet chocolate, which gives it even more chocolate flavor. This recipe will make enough buttercream to cover a two layer, 8 inch round cake.

Now get ready because I’m about to say something scandalous. Ready? Drum roll……….I don’t care much for chocolate cake. (Cue the horrified sounds).

Ok, I’ll clarify that statement a bit. I don’t HATE it, I’d just rather have vanilla. So, why am I telling you this on a post about chocolate buttercream?

Who knows why we like what we like, but what I DO know is that this chocolate buttercream is ‘the bomb.’ Are people still saying ‘the bomb’? I don’t know and I don’t care because I will eat this stuff straight out of the mixer bowl.

I used to make chocolate buttercream using the old school method, which is just adding cocoa powder. You know me, I can’t leave well enough alone. I had to make it even MORE chocolaty by adding actual melted chocolate. I’m telling you it really make a difference. Try it and you’ll see.

This recipe is good ol’ American Buttercream and I like using real butter and not shortening. I think that makes a world of difference.

LET’S TALK ABOUT SOME OF THE INGREDIENTS FOR THE DOUBLE CHOCOLATE BUTTERCREAM:

Cocoa powder: Alright, this is what will give you most of the chocolate taste. Don’t skimp on it.

So the mixing method for this buttercream is really straight forward. You’ll just want to cream your butter until it’s smooth first, then add the cocoa and mix well. After that, you can add in the rest of the ingredients.

TIPS & FAQs FOR THIS CAKE:

Do I have to use half salted butter in this buttercream?

No. I do think it tastes better if you do, but if you can’t find salted butter in your area, then you can use all unsalted and then just add in a small pinch of salt.

What kind of mixer can I use?

Any kind. You can use a stand mixer or a hand mixer. Either one will work just fine with this recipe.

Make sure to melt your semi-sweet chocolate baking bar first.

That way it’ll be cooled down a bit by the time you add it to your buttercream.

Do I have to add the melted semi-sweet chocolate?

No you don’t have too. It does add a little extra chocolate flavor, but you can just make it using the cocoa powder if you want.

You’ll want to try this buttercream on my Chocolate Butter Cake or Easy Double Chocolate Sour Cream Cake. It is amazing, and coming from a vanilla cake person, that is saying something! 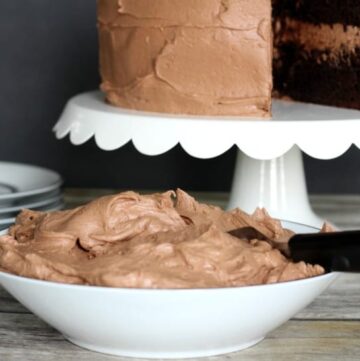 It’s okay to leave this buttercream out of the fridge for a couple days (as long as the room is fairly cool). After that, it should be refrigerated. This buttercream can stay in the fridge for about a week. Nutritional values are an estimate.  Make sure to check out the TIPS & FAQs for this recipe in the blog post, which may answer questions about substitutions. This recipe card may contain affiliate links. As an Amazon Associate, I earn from qualifying purchases.