This icing is insanely good on coconut cake, chocolate cupcakes, or you might just want to eat this one directly out of the bowl!

There isn’t much that I love more than crackin’ open a jar of marshmallow creme and digging straight into it with a spoon. Ok, it does get better when you add peanut butter to it, but that’s not what we’re doing today.

Anyway, my point is I’m totally fine just eating marshmallow fluff out of the jar, but you can’t just throw some marshmallow fluff onto a cake and it work out. I mean I guess you could, but I feel like it just needs a little somethin’.

LET’S TALK ABOUT SOME OF THE INGREDIENTS IN THE FLUFFY MARSHMALLOW FROSTING:

Cream cheese: This helps to give the frosting some stability and it adds to the taste by cutting the sweetness of the marshmallow fluff and confectioner’s sugar.

Butter: Butter makes everything better, right? Well it’s in this recipe to give flavor, creaminess and stability.

Confectioners Sugar: This is what will give it some sweetness.

MIXING METHOD FOR THE MARSHMALLOW FROSTING:

The mixing method for this frosting is super straight forward. You’ll essentially just whip it all up until it’s all super light and fluffy.

I added this frosting to my pineapple coconut cake, but it would also taste amazing on some chocolate cupcakes. (And I will be the first to admit that I don’t even need to put it on anything but a spoon.)

Ok, onto the recipe! 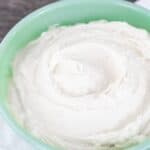 This delicious fluffy marshmallow frosting is the perfect white icing recipe for cakes and cupcakes. You’ll use marshmallow fluff and no egg whites in this frosting recipe and it’s super easy and quick to make. It’s insanely good on coconut cake, chocolate cupcakes, or you might just want to eat this one directly out of the bowl!
Prep Time20 mins
Total Time20 mins
Course: Dessert
Cuisine: American
Servings: 15 servings
Calories: 234kcal
Author: Kara Jane @ I Scream for Buttercream

This buttercream is sweet, so you won’t need a ton of it. This recipe makes enough frosting to lightly cover about 2 dozen cupcakes or one, two (8″ round) layer cake that already has filling. If you like a really thick coating on your cakes, or you’ll be using this as the filling in addition to the outer frosting, then you’ll want to make a recipe plus a half, or just double the recipe. Nutritional values are an estimate. Make sure to check out the TIPS & FAQs for this recipe in the blog post. *This recipe card may contain affiliate links. As an Amazon Associate, I earn from qualifying purchases.