This whipped cream cheese frosting is a super light and fluffy icing. With only a few ingredients, it comes together easily and is the perfect way to top cupcakes or cakes.

I’ve noticed that people really like the whipped style of frosting. I’m not into that grocery store whipped icing. That stuff is just whipped up shortening anyway. To me it doesn’t even seem like it goes with cake, but that’s just my opinion.

Anyway, I wanted to come up with a super fluffy, whipped icing that was similar, but that would be made with some really tasty ingredients and would be a little more stable.

This frosting recipe is only four ingredients, plus the pinch of salt.

LET’S TALK ABOUT SOME OF THE INGREDIENTS IN THE WHIPPED CREAM CHEESE FROSTING:

Confectioner’s Sugar: This is what will add sweetness to your frosting.

Heavy Cream: You’ll be using heavy cream (or whipping cream) to ‘fluff’ everything up. Now, whipping cream is also called heavy cream in some areas. You don’t want to use cool whip though…that’s not the same thing here and your frosting wont turn out right if you use it.

Pay attention to the mixing method on this one. It’s not complicated, but you’ll be mixing in the whipping cream a small amount at a time. You do this so everything mixes together smoothly and you don’t get any clumping.

ITEMS AND TOOLS USED TO MAKE THIS RECIPE: 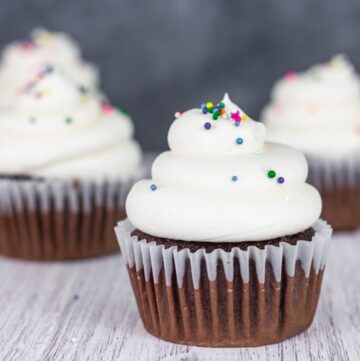 Makes enough to cover about 24 cupcakes, or a two layer 8″ cake. Because this icing is a whipped frosting, it is on the softer side. Store this frosting in the refrigerator. Set the cupcakes, or cake out of the fridge for about 15-20 minutes before serving, so the frosting can get closer to room temp and not as firm. Nutritional values are an estimate. Make sure to check out the TIPS & FAQs for this recipe in the blog post. This recipe card may contain affiliate links. As an Amazon Associate, I earn from qualifying purchases.

Ok, let me know what you think! I could not keep myself out of this stuff. I ate it like it was pudding…straight out of the bowl. (Not a proud moment.)

« Fluffy Marshmallow Frosting
How Far in Advance Can I Bake a Cake? »