This moist, from scratch, german chocolate layer cake is filled with coconut pecan filling, then covered in rich german chocolate buttercream frosting. It’s the perfect chocolate cake recipe for any birthday or celebration.

I’ve been asked a few times to write a recipe for German chocolate cake, but I’ve always hesitated.

I think the reasons were mostly selfish though. I’m allergic to pecans and German chocolate cake has that coconut pecan filling and I really like to taste my own cakes. (Ok, let’s be honest…I really like to eat a lot of my own cakes and I knew I wouldn’t be able to eat any of this one.) I know it sounds selfish.

But, I knew there were people wanting my version of it, so I put on my big girl pants and got to crackin’. I wrote my version of german chocolate cake and tried this puppy out more times than I can count at this point.

I was able to taste the actual cake, just not the filling (which has the pecans in it). Anyway, after trying it multiple times, I think I’ve gotten it to taste just the way I want it to and it makes just the right amount for the pans. (The first couple of times, there was too much batter.)

Now, I’ve said it before and I’ll say it again…I’m not a huge chocolate cake fan. I’m really a vanilla person. But I have to say that this cake really does have a wonderful flavor.

SO LET’S TALK ABOUT SOME OF THE INGREDIENTS IN THE GERMAN CHOCOLATE CAKE, FILLING & BUTTERCREAM:

GERMAN SWEET CHOCOLATE: I owe all the wonderful flavor in this cake to the german sweet chocolate. I just used the Bakers brand of German Chocolate and the flavor is SO good.

You’ll also use the german chocolate in the buttercream…it’s SO yummy.

CAKE FLOUR: We’re using cake flour in this cake because I love how cake flour makes such a light crumb…the cake texture just feels softer. Make sure to check out the FAQ section below if you can’t get cake flour.

COCOA POWDER: You’ll use a little cocoa powder in both the cake and the buttercream just to give an added jolt of chocolate flavor. Use regular cocoa powder, not dutch.

BROWN SUGAR: I’ve added in some brown sugar to the cake, instead of just using all white sugar. I really love brown sugar in chocolate cakes as I feel like it adds some depth and richness to it.

BUTTERMILK: There’s buttermilk in this cake as well and I LOVE baking with buttermilk. It’s rich, has a good fat content to it and really brings a good flavor to the cake. (If you can’t get it, make sure to look at the FAQ section below.)

Now let’s talk just a second about the mixing method for this cake. We’re going to use the reverse creaming method. That just means instead of creaming the butter and sugar together first, you’ll actually mix the dry ingredients and mix in the butter to coat it, then add in the liquid ingredients.

Don’t worry, there’s nothing’ to it. In fact I find it easier to use this mixing method, instead of the regular creaming method and the recipe instructions will talk you through it…plus there’s a video.

Why am I using the reverse creaming method for this cake?

One thing to note and something I’ve noticed when using the reverse creaming method is that these cake layers will bake up flat. There won’t be any dome in the middle at all. Don’t panic that you did anything wrong.

I’ve made this one a bunch of times and it always bakes through, but it won’t puff up in the middle, so don’t panic about that.

I can’t find German sweet chocolate, what do I do?

The german sweet chocolate really makes the cake and buttercream special, but if you can’t find it, you can use semi-sweet chocolate, or even milk chocolate in place of it.

Can I substitute the buttermilk?

You can. If at all possible, you’ll want to use buttermilk if you can get it. It really adds richness and flavor, but if you can’t get it, you can fill a measuring cup up with milk, take out one tablespoon of the milk and replace it with either vinegar or lemon juice. Mix it and let it sit for around five minutes and use that in place of the buttermilk.

Can I substitute the cake flour?

Because natural cocoa powder is acidic and dutch cocoa powder has all the acids neutralized. The cake recipe calls for baking soda and baking soda needs acid to work. The buttermilk and brown sugar also have a bit of acid. You want to keep all the ratios working together. If you lesson the amount of an ingredient, or change it, it can throw off the ratios and your cake may not taste right, or the texture could be off.

Make sure you’re not packing down your flour.

When preparing the coconut pecan filling, it’s essential that you go slow.

If you heat it too fast, it will scramble the eggs and you’ll get cooked egg bits in your filling. This part will take some time, so be patient. If you don’t want to mess with making the filling from scratch, you could always just buy the filling pre-made. There’s no judgment here. 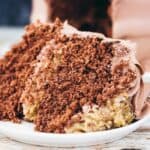 For the coconut pecan filling:

This cake will need to be kept in the refrigerator if you add the filling. It can be frozen for up to a month if wrapped well in plastic wrap and foil. Nutritional values are an estimate. Make sure to check out the TIPS & FAQs for this recipe in the blog post. *This recipe card may contain affiliate links. As an Amazon Associate, I earn from qualifying purchases.