These lemon sour cream cupcakes are super moist and delicious plus they’re actually made from scratch, then topped off with lemon buttercream frosting. They’re perfect for birthdays or any celebration.

This year my son turned twenty. What!? I feel old and like time is moving way too fast. Ok, back to the point…I’d been working on some cool birthday cupcake toppers for him that I had planned to put on top of chocolate cupcakes (since forever that’s what he’s asked for.) Out of the blue, he texted that all he really wanted for his birthday was some lemon cake.

Actually he said, and I quote here, “Mom, I don’t need any money for my birthday. All I want is a bad to the bone lemon cake.”  Seriously, that’s what he said.

So of course I immediately changed gears because well, I’m still in the throws of the empty-nest syndrome (even though technically I’ve got step-kids.) Anyway, my only son says he wants lemon cake for his birthday, then that’s what he’ll get.

This post contains affiliate links, which means I will receive a referral commission, at no additional cost to you, if you make a purchase using these links. As an Amazon Associate, I earn from qualifying purchases.

These links also use cookies, which tracks and allows me to get credit for the referral. You can see my policies linked in the website footer.

I did, however come to a compromise. I mentioned I had been working on some cupcake toppers especially for his birthday and that he’d have to be happy with lemon cupcakes instead of a large cake. He certainly didn’t seem to mind.

I had only a few days to write up and test the recipe before his birthday was here and so I decided to use my Favorite Vanilla Bean Cake recipe as a base and change it up to give it a blast of lemon flavor.

Remember, he said he wanted a ‘bad to the bone’ lemon cake, so I tried to pack as much lemon flavor into those cupcakes as I could.

Let me tell you I was actually surprised at how much I liked them. I’ve never been much of a lemon cake fan, but I ended up eating four when I was finished. FOUR! Not even kidding.

These cupcakes aren’t complicated to make. When you make the favorite vanilla bean cake, you use the reverse creaming method, which is when you’ll mix the butter with the flour first to coat it.

For this recipe, you’ll need real lemons and you’ll need to zest the lemons. Make sure to not grate them too far down (like into the white of the lemon), or it’ll be bitter.

You’ll also add in a package of lemon pudding. Yep, I told you I was really going crazy with the lemon flavor. Make sure to reserve one tablespoon of the dry pudding mixture, because you’ll want to add that to your buttercream.

These lemon sour cream cupcakes have a soft consistency that’s moist, with just the right amount of lemon taste, then topped with buttercream that’s packed full of lemon flavor.

Ok, ready for the recipe? Here ya go. 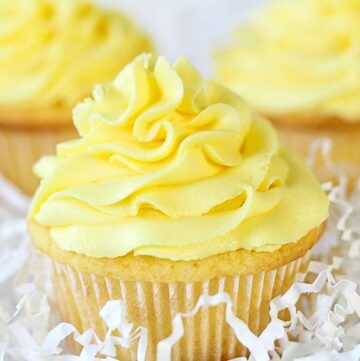 For the lemon buttercream:

Nutritional values are an estimate. Make sure to check out the TIPS & FAQs for this recipe in the blog post.

TOOLS USED FOR THE LEMON CUPCAKES: