A moist red velvet cake with chopped oreos covered with a thick chocolate pudding soaked into the cake then topped off with a fluffy cream cheese and oreo whipped topping.

Have you ever had a poke cake? If not, you’re in for a treat. Essentially it’s just a cake that’s baked, but then when it’s still warm, you poke holes in it and pour in pudding.

The pudding then soaks down into the cake a bit and whoa…flavor overload. Then you top it all off with a whipped topping, which I cranked up a notch by adding in cream cheese and Oreos. 😲

This cake is a chilled cake, so it’ll be kept in the fridge and what I’ve learned is that it’s even better after it’s been in the fridge overnight and the cake has had more time to soak up the pudding a bit more.

LET’S TALK ABOUT SOME OF THE INGREDIENTS IN THE RED VELVET OREO POKE CAKE:

Red Velvet Cake Mix: This cake is easy to do because the base of it is a cake mix. You’ll be adding more ingredients to it, so it’s not going to taste like a cake mix cake, but it assures you’ll get a nice moist cake in a shorter amount of time.

Oreos: This is the secret ingredient and you’ll used crushed Oreos for both the cake and the topping. I used a family size package of Oreos and had extra left over, so a regular sized package should be enough.

Cream Cheese: This is what takes the whipped topping up a notch. You won’t be using boring ol’ Cool whip on this cake. You’ll be making your own amazingly good whipped topping.

Heavy Cream: Ok, heavy cream is also called whipping cream (not whipped cream). You’ll use this to make the whipped topping. Using some type of lower fat milk won’t work here. You need the fat so that it will actually whip up and you want it cold.

This cake recipe makes a really thick cake and if your pan isn’t thick enough, it can bake over. If you have a thinner pan, then you may just want to make the cake recipe as directed on the cake mix box without adding all the additional ingredients for the cake part.

Make sure to pour the pudding mixture over the cake when the cake is still warm.

This helps the pudding soak in.

Work fast when making the pudding.

You want the pudding to just be thickening up, but not thick yet. It needs to be somewhat still liquid so that it can soak into the holes you made.

Make the holes in your cake first before you make the pudding.

I didn’t and I really should have because the pudding thickens up quickly.

After you add the pudding, make sure to cover the cake and chill it for at least an hour.

You want the cake to be fully chilled before you add the whipped topping to it.

Once the topping is on the cake, you want to chill the entire cake overnight.

Chilling it overnight will allow the pudding to really soak into the cake and it adds flavor and moisture to it. Its SO much better after sitting overnight in the fridge.

When whipping up the whipped topping, use either a glass or a metal bowl and set it into the freezer to get it chilled first.

Using a chilled bowl and chilled cream will help it whip up better. 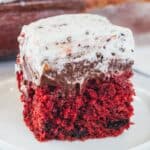 For the pudding mixture:

For the pudding mixture:

If you do not have a deep 13×9 inch pan (if your pan is shallow), you’ll probably want to just make the red velvet cake mix according to the directions on the box instead of adding the cake ingredients above. This cake will bake up high and if your 13×9 inch pan isn’t deep (at least 2 inches deep), the cake will bake over it. This cake should be stored in the refrigerator and served chilled. Nutritional values are an estimate. Make sure to check out the TIPS & FAQs for this recipe in the blog post. *This recipe card may contain affiliate links. As an Amazon Associate, I earn from qualifying purchases.

Don’t Forget to Pin it for Below!

Previous Post: « How to Design Your Own Printable Cupcake Toppers
Next Post: What’s the Difference Between Baking Soda and Baking Powder When Baking Cakes? »