You’ll want to make this moist french vanilla cake from scratch every day. Add this fluffy cake to your best cake recipe list because it’s sure to be a favorite.

When I was just a kid, I used to make cakes like a crazy person. I mean I was always in the kitchen making cakes. (I have no idea how I wasn’t a gazillion pounds.)

Back then, I made cakes from a box. It was easier for me and frankly I was impatient and just wanted to eat my cake as soon as I could.

I was very fond of the French Vanilla cake mixes. Nine times out of ten, I’d choose that flavor to bake. So, for this recipe, I really wanted to create a scratch version of that cake.

So why ‘french’ vanilla and what’s the difference? Well I really didn’t know. All I knew was that I really liked the flavor. So I did what I do best and decided to do a little research.

I’ll spare you all the details and just go with a summary here if you’re interested. So generally, types of vanilla are named after the places where they’re grown…Madagascar vanilla, Tahitian vanilla etc., but apparently that’s not the case with French vanilla.

French vanilla is actually a way of making a custard that gives it a rich, deeper taste. So, yes, it’s a flavor, but not in the same way as the other vanilla extracts. You get that flavor because of a method that is used to make the custard.

Well okay…I’m not gonna argue with science or history, but I’m just sayin’ that I can tell the difference. It’s subtle, but I knew what I was looking for and I knew there had to be a way to get it.

Well I actually found a french vanilla extract that is Uh-mazing! I’m serious. I’m using it in everything now. Here is a link to it and I REALLY hope you can get it. French Vanilla Extract

You can make this recipe without it, but I think it’s SO good if you can get it.

We’re covering this bad boy with french vanilla buttercream. We’re not skimping on the french vanilla…nope…might as well go for the gold, right?

The mixing method for this cake is the old fashioned creaming method. Nothing out of the ordinary here.

Ok, let’s get to the recipe. Don’t forget, there’s a video there as well to help. 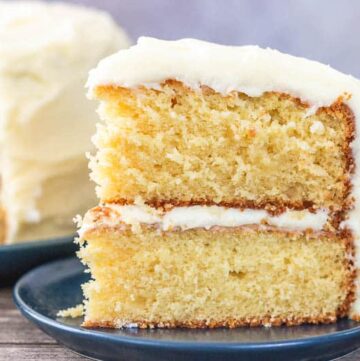 This cake can be stored in the fridge for approximately 5-6 days. Make sure to read the tips & faq section in the blog post for frequently asked questions about this recipe. This recipe card may contain affiliate links. As an Amazon Associate, I earn from qualifying purchases.

« Should I Refrigerate My Cake Before Decorating?
12 Simple and Easy Buttercream Cake Borders »