This almost homemade buttercream frosting is so good and super easy! No one will ever guess that it was made from canned frosting…they’ll just comment about how amazing it is. This is a great way to make canned frosting taste just like homemade and there’s an option for vanilla and chocolate!

First, if you’re a cake or buttercream purist, just look away. This recipe isn’t a scratch recipe…it’s a ‘doctored’ recipe. I’m okay with that and if you are too, then I think you’ll really like this one. If you’re more of a purest, this recipe isn’t for you and you might want to check out the buttercream recipes on my site.

I do mostly scratch recipes, but I also like to do ‘doctored’ or ‘cheater’ recipes on occasion…I think that’s totally okay.

However this recipe is for those that want to get started and feel intimidated by scratch recipes, for those who may not have enough ingredients on hand for scratch buttercream, or for those who want to stretch a can of frosting.

Ok, so here’s how this recipe came about: I made this recipe up on a whim one year for Christmas. I made a bunch of cupcakes for a get-together and I didn’t have enough ingredients to make a big batch of homemade buttercream, but I did have a can of frosting in my cupboard.

Before you say something about me having a can of frosting in my cupboard…just hear me out. Here’s my excuse: I like canned frosting…sometimes. There I said it. That’s my confession in writing.

I mean obviously I like ‘from scratch’ buttercream too, but on some occasions, the canned kind can actually be pretty good. Say, when you have a cookie that needs a little something on it and you don’t want to make up a batch of frosting.

Ok, yes I have a problem and I dip way too many cookies in canned frosting…I can’t stop. Anyway I had a can of frosting in the pantry, but obviously that’s not enough to frost at least two dozen cupcakes, plus canned frosting doesn’t pipe well at all. It’s too thin.

So I improvised and ended up getting so many compliments on it, it was insane.

I mentioned this hack to a coworker the other day who didn’t want to go through the trouble of making ‘from scratch’ buttercream, so I said well just add some things to a container of frosting and she was all for that suggestion.

I mean really this is just scratch buttercream added to a can of frosting, but OMG it’s SO good!

I’ve got two options for you…vanilla and chocolate and they’re both super easy to do and you’ll be able to pipe a little with them…not anything complicated, but you can pipe swirls onto your cupcakes or easy borders onto your cakes.

Yes, this buttercream is sweet…it’s frosting. I get comments all the time about how sweet a frosting is or a cake is, but it’s frosting and cake…it’s supposed to be sweet. A less sweet option would be Swiss meringue buttercream and that is definitely not quick, or easy if you don’t have experience with it.

Anyway you are adding in some ingredients to the can of frosting to make it taste more homemade and you can even switch up the canned frosting flavors if you like.

Let’s talk about some of the ingredients in this buttercream frosting:

Canned frosting – I’m using either vanilla or chocolate, but you could really use any flavor and just change up the ingredients a little. See the FAQ section of this post for what types of frosting I’m using (plus the recipe card).

Powdered sugar – This is the same thing as confectioner’s sugar
Butter – You’ll use unsalted butter and at room temperature (not melted).

Vanilla or Other Extracts – You’ll want to add in a bit of extra flavor depending on what flavor of canned frosting you’re using. I add vanilla to both vanilla and chocolate cheater buttercream, but adding something like almond or strawberry extracts to different canned frostings would work too.

Mixing method for the frosting:

The mixing method for this buttercream is the easiest thing ever. Seriously you’ll just be creaming the butter first, then mixing in the canned frosting, then adding all the other ingredients and mixing well.

What type of canned frosting should I use?

Why not just make buttercream from scratch?

If I can’t get unsalted butter, can I use salted?

I have not tried this recipe with salted butter, but I think it will be fine.

Can I just melt the butter in the microwave?

No don’t do that. It should be room temperature so that it will mix easier with the other ingredients, but you don’t want to microwave it. That will heat it unevenly and get parts of it too hot. That could cause texture problems with your buttercream and if it’s really melted, then your buttercream will be too thin when you mix it up.

Can I substitute the vanilla bean paste?

Do I really need to mix it for two minutes?

Yes, if you want it to be super fluffy.

Can you pipe designs with this buttercream?

Well not anything complicated, but you can pipe swirls onto your cupcakes or easy borders onto your cakes.

Can you use this buttercream under fondant?

I wouldn’t. It’s a little too soft. I generally only use ganache under fondant, but even if you like using buttercream under fondant, this one would probably be a little on the softer side.

Supplies used to make this buttercream: 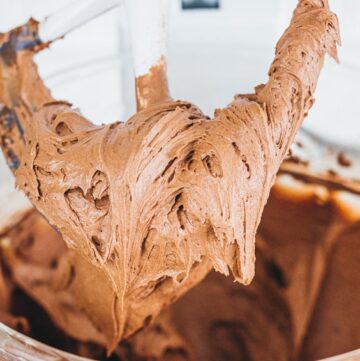 For the vanilla cheater frosting:

For the chocolate cheater frosting:

For the vanilla frosting:

For the chocolate frosting:

This buttercream makes enough to cover a two layer, 8″ round cake or about 24 cupcakes. Nutritional values are an estimate. Nutritional information is for the icing only and does not include cake. Make sure to check out the TIPS & FAQs for this recipe in the blog post, which may answer questions about substitutions. *This recipe card may contain affiliate links. As an Amazon Associate, I earn from qualifying purchases.

« How Much Cake Batter Do I Need?
Sour Cream Blueberry Coffee Cake »