These cinnamon cupcakes are made from scratch and topped with cinnamon buttercream frosting. They’re the perfect treat for the holidays or any other time you want a yummy cinnamon treat.

The cupcakes are fluffy and moist with just the right amount of cinnamon and the buttercream adds the perfect finishing touch.

These cupcakes really are a family favorite and it’s so hard to eat just one!

Now let’s go through just a few of the important ingredients in these cupcakes and the buttercream.

Unsalted butter: Unsalted is best to use for the cake and the buttercream as using salted butter could unintentionally add in too much salt. Make sure your butter is room temp, but don’t microwave it.

You can check out my post on the differences between unsalted and salted butter here: Unsalted butter vs salted butter (link that will take you to a post about butter in cake recipes)

Buttermilk: Real buttermilk is best in this recipe, but if you can’t get access to it, you can use a substitute. (Make sure to check out the FAQ and tips section below for that.)

Cinnamon: Obviously you’ll need cinnamon for these cupcakes and for the buttercream. There really is no other substitute. I especially like Saigon cinnamon.

For the cupcakes, you’ll use the regular creaming method which just means you’ll whip up the sugar and butter nice and fluffy, then you’ll alternately add in the dry and liquid ingredients being careful not to overmix the batter.

Do I have to use unsalted butter?

It’s really best to use unsalted butter in the cake and the buttercream so you can be specific with the amount of salt you add. If you don’t have access to unsalted butter, just use salted and omit any salt called for in the recipe.

Make sure the butter is at room temperature.

Don’t microwave it though, just set it out to slowly come to room temperature. Microwaving it heats in unevenly and you’ll get hotspots.

Can I substitute the buttermilk?

It’s really best if you use real buttermilk in this recipe. It will not make the cupcakes taste like buttermilk…it just adds a lot of moisture and amps up the flavor. If you really can’t get it though, you can use the substitution below:

Add one tablespoon of lemon juice or white vinegar to a measuring cup, then add milk until it measures 1 cup. Stir well and let it sit for about five minutes before using.

Make sure not to pack down the flour when you measure it.

Do I need to spray the cupcake liners with non-stick spray?

You can spray them if you want. I’ve tried it both ways, spraying and not spraying, and the cupcakes didn’t stick either time for me.

My cupcakes came out with flat tops, did I do something wrong?

No, you didn’t do anything wrong. These cupcakes will puff up and then flatten out a bit on the top as they bake. That’s okay and it does not affect the taste, texture or moistness.

If you really want a dome on the top of your cupcakes and don’t want them flat, you can cover and chill the cupcake batter for about 20 minutes before adding to the cupcake tins and that helps.

I have leftover batter after filling all 24 cupcake tins, what did I do wrong?

You didn’t do anything wrong. This cupcake recipe will make a few extra cupcakes, just cover and chill the remaining batter until you free up a cupcake pan.

Can I make this recipe as a layer cake?

I have not tested this recipe out as a layer cake, but it should work just fine. Add the batter to two, 8 inch round cake pans and bake at 350 degrees F. The cake layers will take a little longer to bake than cupcakes, so start checking for doneness at around 25 minutes or so. A toothpick inserted into the center will come out with a few moist crumbs or clean.

Make sure to cool the cupcakes completely before adding the buttercream frosting.

Even if the cupcakes are just slightly warm, the buttercream will slide off the top of the cupcake.

How do I store these cupcakes?

Make sure to store cupcakes in a well-sealed container so they don’t dry out. You don’t have to refrigerate these cupcakes unless you use a perishable frosting. If you do store these in the fridge, make sure they are tightly covered as they will dry out faster in the fridge.

Can these cupcakes be frozen?

Supplies Used for this Cake: 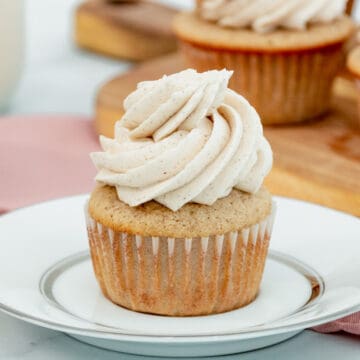 Real buttermilk is best, but if you can’t get it, you can make sour milk as a substitution: Pour 1 ½ cup of milk into a cup or bowl. Take out 1 ½ tablespoon of the milk and replace it with 1 ½ tablespoon of vinegar or lemon juice. Mix together and let it sit for a couple of minutes before adding to the liquid ingredients. Store cupcakes in a well-sealed container. They’re best eaten within 2-3 days. Nutritional values are an estimate. Make sure to check out the TIPS & FAQs for this recipe in the blog post, which may answer questions you might have. *This recipe card may contain affiliate links. As an Amazon Associate, I earn from qualifying purchases.