This isn’t your normal cinnamon cake, we’re pumping up the flavor and moistness in this one and it seriously tastes like a cinnamon roll. Have this Cinnamon Swirl Sour Cream Cake as a rich breakfast coffee cake, or have it for dessert. It’s super moist, thanks to the help of sour cream, then it’s covered in a smooth cinnamon glaze.

Oh how I love cinnamon. I add it to just about anything. I’m not just talking about cinnamon rolls and pies, I mean stuff like cereal or ice cream. Have you tried it on ice cream? You should, it’s amazing. Anyway, to me, cinnamon just makes anything better.

This Cinnamon Swirl Sour Cream Cake has got some major cinnamon swirl going on.

I couldn’t decide whether to call this one cinnamon swirl sour cream cake, or actually just cinnamon roll cake because it seriously tastes like a straight up cinnamon roll.

This cake comes out of the oven with a river of cinnamon running throughout the middle. It gives you a good mouthful of brown sugar cinnamony goodness.

And if you want even more swirl than my cake has, feel free to swirl your batter a little more. You just want to be careful that you don’t go crazy, or you’ll lose the swirl effect.

Now, any time is a good time to have cinnamon cake, but it’s especially good during the holidays, because seriously this cake tastes like a mouthful of Christmas.

LET’S TALK ABOUT SOME OF THE INGREDIENTS FOR THE CINNAMON SWIRL CAKE:

Cinnamon: Ok, obviously this cinnamon cake’s got cinnamon in it. No secret there, but we’ll be adding cinnamon to the batter, for the swirl and into the glaze. Nope we’re not skimping on the cinnamon.

Oh and I love using Saigon Cinnamon. It’s a really nice cinnamon, so if you can get it, definitely use it.

Brown Sugar: The brown sugar is for the cinnamon swirl. Don’t skip this part…it really makes the cake.

Sour Cream: I love sour cream in cakes. It makes them SO moist and gives them such good flavor.

The mixing method for this cake is the creaming method. You’ll be whipping the butter and sugar until fluffy and then adding in the dry and liquid ingredients alternately. Easy Peasy.

Make sure to grease and flour your bundt pan really well.

This cake is really moist and will stick to the pan if you don’t.

Do I really need to have room temperature butter? Can I just microwave it?

Should I use dark or light brown sugar?

Either one is perfectly fine.

Can I substitute the sour cream?

You’ll get best results using sour cream, but if you can’t get it, you can use yogurt instead. Try and use the full fat version and not the light yogurt though.

How to I swirl the cinnamon?

I just took a knife and swirled a few times around the cake once the batter was added to the pan. If you even more of a swirl, then use your knife and drag it around the batter a few more times. Be careful not to swirl it too much though or you’ll lose the swirl and it’ll just blend in too much with the cake batter.

Ok, now let’s get to the recipe!

***I write recipes using volume (cups) measurements because here in the U.S., this is what people are used to seeing and using. For weight in metric measurements, click the ‘metric’ button under the ingredients in the recipe card. The weights are converted by a program, not me, and it’s a best guess. Please note that because I develop recipes using ‘cups’ I can’t guarantee that weighing the ingredients will produce the exact same results. 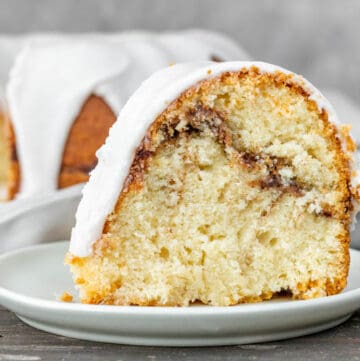 For the Cinnamon Glaze:

This cake does not need to be kept in the refrigerator, unless you’ve added perishable frosting. Nutritional values are an estimate. Make sure to check out the TIPS & FAQs for this recipe in the blog post. This recipe card may contain affiliate links. As an Amazon Associate, I earn from qualifying purchases.

If you make this one, let me know what you think! I hope you love it as much as I do. 🙂