The Cake Swag Club is coming soon! Get on the waitlist now!–Click here

I love the caramely goodness of brown sugar. I think it gives such a richness and depth of flavor to baked goods, especially cakes. This Brown Sugar Spice Cake will not disappoint and is the perfect way to finish off a holiday meal plus it makes a really beautiful centerpiece on your table.

The cake itself is a more dense texture that still remains moist. It’s got a nice hint of spices running through it along with the richness of the brown sugar. It’s then topped off with a thick coating of caramel cream cheese glaze.

You won’t be doing anything fancy with the mixing method on this one. It’s the average creaming method and then you’ll add in the dry and liquid ingredients alternately.

The cream cheese glaze gets its caramel flavor from melted caramel chips. Using the chips makes it much easier, but you could even make your own homemade caramel in place of that if you feel industrious.

I finished the cake off by adding in some sugared cranberries to the middle. I’ve provided the link to the super easy recipe I used to make them. I really like the tartness of the cranberries with the rich caramel flavor of the cake.

You can find the recipe I used for the sugared cranberries here: Sugared Cranberries

The cranberries are certainly optional, but I think they make the cake so pretty, right? Either way, I think you’re gonna love this cake.

Let’s get to the recipe: 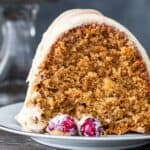 Nothing says autumn more than a delicious and moist spice cake. The deep flavor of the brown sugar spice cake goes so well with the richness of the caramel glaze which isn’t your normal topping for a spice cake, and that’s what makes this the perfect fall cake.
Prep Time35 mins
Cook Time50 mins
Total Time1 hr 25 mins
Course: Dessert
Cuisine: American
Servings: 14 servings
Calories: 675kcal
Author: Kara Jane @ I Scream for Buttercream

Since this cake contains cream cheese in the glaze, it will need to be kept in the refrigerator. You can take it out about 20 minutes before serving, so it can get a little closer to room temperature before serving. This recipe card may contain affiliate links. As an Amazon Associate, I earn from qualifying purchases.