Previously, I added a recipe on the blog for whipped vanilla buttercream and I loved that one so much, I thought I’d make a chocolate version.

This stuff is so good, it’s hard not to just stand here and eat it straight from the bowl.

This will definitely be a family favorite.

This buttercream tastes like a chocolate mousse, but it’s a little sturdier than that.

It’s amazing on both cakes and cupcakes and works as a topping or a filling.

Now, let’s talk a little bit about just some of the ingredients for this recipe. (The entire ingredient list is in the recipe card lower in this post.)

Unsalted Butter: You’ll want to use unsalted real butter for this recipe. You don’t want to use margarine.

You’ll also want to make sure that you set the butter out at least an hour before you start making this buttercream as it needs to be room temperature.

Make sure and not microwave it though.

Unsweetened Cocoa Powder: This adds a powerful chocolate punch. Make sure to use unsweetened cocoa powder though and not the cocoa drink mix.

Confectioner’s Sugar: This is what will give the buttercream sweetness and will stabilize it.

Vanilla Extract: Yes it’s still a good idea to add vanilla into chocolate buttercream. It only improves it.

Heavy Cream (Whipping Cream): This is what makes everything fluffy and whipped. Make sure you’re not using whipped cream though as that’s not the same thing. (We’ll get into this more in the FAQ section down below.)

The mixing method for this buttercream isn’t complicated. The main thing to note is that you’ll add the heavy cream in two parts and you’ll want to make sure you whip it for the amount of time called for in the recipe card.

Can I use margarine instead of butter?

No, it’s best to use real butter for this recipe.

Can I use salted butter instead of unsalted?

You can, but you just can’t predict how salty it will be. If that’s all you have though, you can use it and just omit the pinch of salt called for in the recipe.

Make sure to use unsweetened cocoa powder.

You don’t want to use cocoa drink mix.

Do I have to sift the confectioner’s sugar?

You don’t have to, but it really helps make this buttercream extra light and fluffy.

Can I use whipped cream or Cool Whip instead of the heavy cream or whipping cream?

If you use whipped cream (Cool Whip), that is something different and the recipe will not turn out correctly. (Make sure to watch the video in the recipe card as it will show what heavy cream is.)

Make sure to add the cream in two parts.

The instructions and video will explain this, but it’s best to add it in two parts, so your buttercream doesn’t separate on you.

Do I have to whip it for a full five minutes?

Yes, you want to whip it on high for the full five minutes as that is what makes it light and fluffy. If you don’t whip it that high and that long, then the buttercream will be too liquidy.

Do I have to use a stand mixer? Can I use a hand mixer?

Yes, you can certainly use a hand mixer.

***I write recipes using volume (cups) measurements because here in the U.S., this is what people are used to seeing and using. For weight in metric measurements, click the ‘metric’ button under the ingredients in the recipe card. The weights are converted by a program, not me, and it’s a best guess. Please note that because I develop recipes using ‘cups’ I can’t guarantee that weighing the ingredients will produce the exact same results. 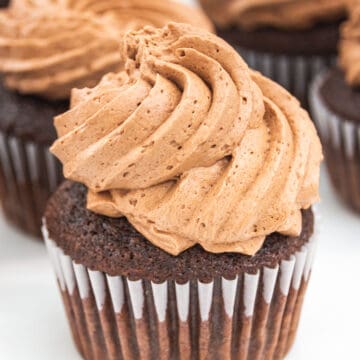 This buttercream makes enough to cover about 24 cupcakes as a light frosting or it can fill about 36 cupcakes. If you prefer a large amount of buttercream on your layer cakes though, you may want to make a recipe and a half. This is a light buttercream, so make sure your cake or cupcakes are cool when you add the buttercream and it should be stored in the fridge. Nutritional values are an estimate. Make sure to check out the TIPS & FAQs for this recipe in the blog post, which may answer questions about substitutions. *This recipe card may contain affiliate links. As an Amazon Associate, I earn from qualifying purchases.

« Do I Have to Crumb Coat a Cake?
Easy Chocolate Cream Cheese Pound Cake »