A light and whipped version of the traditional American buttercream.

This fluffy vanilla buttercream is a light and whipped version of the traditional American buttercream. It’s perfect on cake and cupcakes as a topping as well as a filling.

I am IN LOVE with this buttercream. It’s like a combination of the original American buttercream and the whipped icing you sometimes find on cakes you can by at the store.

Personally, I really don’t care for the whipped icing you get on grocery store cakes. They’re made with shortening and it just feels greasy to me and kind of bland.

I know everyone has their own tastes, but I really wanted to get the yummy taste of American buttercream (without the over the top sweetness) and the fluffiness of that whipped icing.

I think I accomplished that with this recipe.

This recipe is very similar to my Vanilla Bean Buttercream recipe, but it does use different amounts of those ingredients and the mixing method is altered.

Both of those things make a big difference in trying to get a fluffy whipped consistency.

Let’s talk about some of the ingredients:

Unsalted Butter: You’ll want to use unsalted butter. If you use salted butter, you may unintentionally add in too much salt.

You’ll also want your butter to be room temperature.

Confectioner’s Sugar: You’ll still be using confectioner’s sugar just like in traditional American Buttercream. This whipped version is a bit sweeter than just a plain whipped topping and the sugar also helps in getting the right consistency.

Vanilla Bean Paste or Extract: You’ll want to try and use a good vanilla here. I personally love vanilla bean paste. (You can order it here in my shop, or if I’m sold out, you can get it here.)

If you can’t get vanilla bean paste, you can use vanilla extract instead in the same amount.

Heavy cream or whipping cream is just like it sounds. It’s a very rich heavy cream. This recipe won’t work if you use ‘whipped cream’.

Whipped cream is already whipped and most of the time it’s made with vegetable shortening, which is not what you want for this recipe.

Let’s talk about the mixing method:

The mixing method is pretty straight forward. You’ll just cream the butter well and add in the heavy cream in two parts, then whip it for close to five minutes.

It’s really important to whip it that long so you’ll get it nice and fluffy.

Make sure to let your butter come to room temperature.

You don’t want to microwave your butter because it will not mix properly with the other ingredients. Just cut up your butter and let it come to room temp on its own.

Do I have to sift the confectioner’s sugar?

Well you don’t have to, but it really helps get the buttercream nice and fluffy if you do.

I don’t have vanilla bean paste, can I use extract?

Yes, you can use vanilla extract in place of vanilla bean paste in the same amounts.

Makes sure not to omit the salt.

It helps bring out the flavor of the buttercream and it cuts the sweetness a bit.

What is heavy cream or whipping cream? Can I use whipped cream instead?

Make sure you mix it for the full time stated in the recipe.

Mixing it for a long amount of time is what will help get it super light and airy.

Do I have to use a stand mixer?

No, you don’t have to have a stand mixer to make this recipe. You can use an electric hand mixer. You’ll just have to stand there and mix for five minutes, but it is do-able. 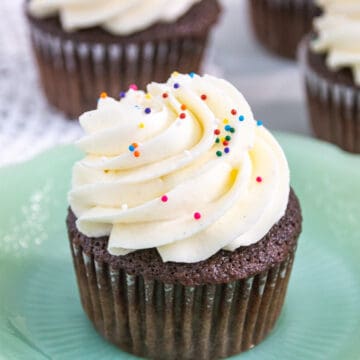 This buttercream makes enough to cover about 24 cupcakes as a light frosting or it can fill about 36 cupcakes. If you prefer a large amount of buttercream on your layer cakes though, you may want to make a recipe and a half. This buttercream is fine to set out at room temperature for several hours, but then can be refrigerated after that. Let it come bake to almost room temperature before serving. Nutritional values are an estimate. Make sure to check out the TIPS & FAQs for this recipe in the blog post, which may answer questions about substitutions. *This recipe card may contain affiliate links. As an Amazon Associate, I earn from qualifying purchases.