This pumpkin toffee crunch cake is like a mouth full of fall. Not only is this cake super moist with tons of pumpkin flavor, but it’s got bits of crunchy, buttery toffee throughout it, then it’s covered in a delicious cinnamon cream cheese buttercream.

I’m not sure how much I’m allowed to brag about something I made before it starts sounding obnoxious, but I am IN LOVE with this cake.

I have my cake flavor favorites and honestly I never thought that a pumpkin cake would be at the top of that list…until I made this one.

I did not skimp on the ingredients with this one and it is definitely NOT on anyone’s ‘okay to eat on a diet’ list. But THAT is what makes it a special treat.

You don’t want to go substituting or attempting to lessen some of the ingredients with this one, because you may not get the same results. I challenge you to just try it as written and see what you think. I’m just sayin’ I think it’ll knock your socks off just as it is.

There’re no crazy ingredients in this one. You’ll be using pumpkin (I just used the canned pumpkin), pumpkin pie spice (and I’ve got a substitution for that in the printable recipe), all the usual cake ingredients and you’ll be adding chopped toffee bits.

I just bought one small bag of toffee bits and it was enough to use in my cake and as garnish.

Let’s talk about the mixing method for this cake:

The mixing method is really straight forward as well. No alternating ingredients on this one. You’ll just add your dry ingredients to one bowl, liquid in the other bowl and mix. Simple, right?

This cake really is very simple to mix up. So simple in fact, that you could even use a wooden spoon to mix it if you wanted to.

One of those people was my husband who went on and on about it and he doesn’t even like sweets! You should have seen his face when I told him it was all gone!

So, I’m just sayin’ try it out…even if you’re not a fan of pumpkin pie. You might surprise yourself.

Now let’s get to the recipe. 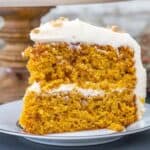 This pumpkin toffee crunch cake is like a mouth full of fall. Not only is this cake super moist with tons of pumpkin flavor, but it’s got bits of crunchy, buttery toffee throughout it, then it’s covered in a delicious cinnamon cream cheese buttercream.
Course Dessert
Cuisine American
Prep Time 20 minutes
Cook Time 45 minutes
Total Time 1 hour 5 minutes
Servings 12 servings (approx.)
Calories 745kcal
Author Kara Jane @ I Scream for Buttercream

Putting the cake together:

Keep this cake chilled, since it’s covered with cream cheese buttercream. You can set it out about 15-20 minutes prior to serving, so that it will soften a bit. This recipe card may contain affiliate links. As an Amazon Associate, I earn from qualifying purchases.